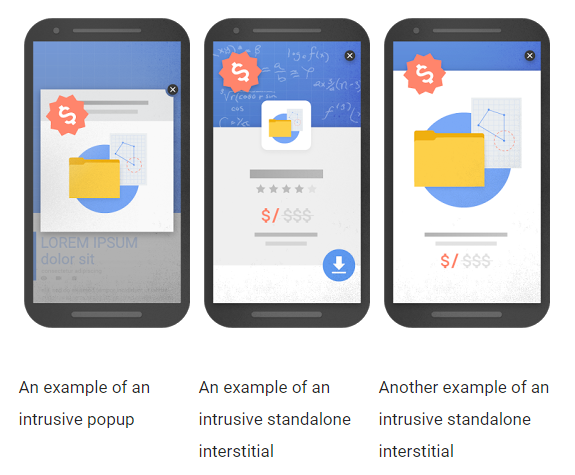 If you hate pop-up ads and interstitials (those full page ads that pop up before a web page) while browsing the web on your cell phone, you’re in luck, because Google will be showing you less of them.

Thanks to new regulations, any mobile web page that uses interstitials or pop-up ads will see their Google ranking tumble. Originally announced back in August 2016, Google confirmed that the new algorithm update has officially gone live as of January 10.

Google is targeting what they call “problematic transitions,” and gave three specific examples of pages that would be affected. The first is pages that show a pop up that opens right after a user clicks a link or as they scroll through a page, hiding the page’s content. Also affected are pages that show an interstitial ad that must be closed out before the user gets to their desired content and pages that keep content “under the fold” with an interstitial on the top of the page. Google has noted that “small” pop ups won’t be affected by these rules, but they didn’t give any details about what specific size constitutes “small.”

In short, if a web page purposely hides content behind an ad or forces interaction with an ad, Google doesn’t like it. For now, these changes do only apply to mobile versions of a site, so desktop pages are safe.

Of course, there are some caveats. The new rule applies only to the first click on a page from Google. Once you’re on a web page, there are no penalties if you encounter the ads following another link. Also, Google will not downrank web pages that use legally required interstitials, like those needed to verify age.

Explaining their stance, Google released a statement saying, “Although the majority of pages now have text and content on the page that is readable without zooming, we’ve recently seen many examples where these pages show intrusive interstitials to users. While the underlying content is present on the page and available to be indexed by Google, content may be visually obscured by an interstitial. This can frustrate users because they are unable to easily access the content that they were expecting when they tapped on the search result.”

The new rules have been in place since last week, but there are no reports of widespread impacts yet – likely because Google did give a significant warning period for people to adjust their web sites. Some online users have noted that this may also be because there are a number of different ways to program interstitials, and it’s just taking Google time to get around to combating all the different versions.

Web pages need ads to operate, but forced interactions can be a pretty frustrating user experience, so it’s good to see Google take a strong stance here. And if you’re someone starting a blog a trying to make money blogging, make sure you focus on providing a quality experience for your audience.