Internet freedom is under fire across the globe, and it’s only getting worse.

A new report from Freedom House, an independent watchdog group dedicated to global freedom and democracy, says that 67% of the world lives in a country that censors online activity in some way. This marks the sixth consecutive year that online freedom has been on the decline around the world.

Social media is by far the most regulated facet of online activity, with authorities in 38 countries making arrests in the past 12 months based on social media posts. 25% of all internet users live in a nation where people have been arrested for simply liking, sharing, or posting content on Facebook. 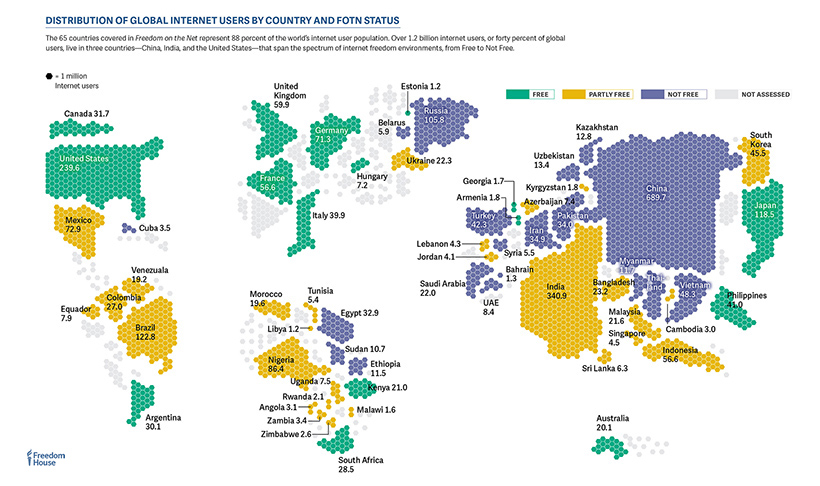 For the most part, government crackdowns on social media have been put in place during times of protest or dissent. Government leaders argue that these networks can spread misinformation quickly in volatile situations, and can rapidly turn a situation violent.

While that argument may seem to make some sense on the surface, what about instances where citizens are arrested for simply speaking their mind through a blog, or countries where just criticizing the government on social media can lead to imprisonment?

It’s no coincidence that social media bans are coming during a time when more people that ever get their news from social media, and when social media is one of the most used tools to keep government officials accountable.

So what does this mean for people who use social media and for bloggers who share their opinions on their own web sites?

For people who live in restricted online regions, it means they’ll have to start tailoring what they say to what’s allowed or risk getting arrested or otherwise punished, like the blogger arrested in Vietnam earlier this year for criticizing the government or the student in Egypt who was sentenced to 3 years in prison for posting a photoshopped image of the country’s president with Mickey Mouse ears. For people who live in “free” online territories like the US, it means they’ll need to continue to speak out.

Laws regarding online speech aren’t going to stop people from using social networks entirely, but they certainly will force people to use a little self-censorship, taking away some of technology’s real power to bring about change.

A decline in online freedom has an impact on everyone, but it’s especially hurtful to minorities, people in marginalized communities, those who defend human rights online, and journalists who keep an eye on government.

Social media is by far the leading tool for these people to have their voice heard, and if they have to make sure what they say fits with what’s permissible, it’s clear that their real message might not be heard.

It’s been proven time and time again that the internet is an invaluable tool for social justice, which is exactly why many governments are increasing their censorship.

Citizens who live with internet freedom must make sure they continue to demand accountability from government, must keep pressing for internet freedom, and must make every effort to speak out for the silenced.

4 Comments on "Internet Freedom is Declining, 2/3 of the Global Internet Population Lives in Countries with Censored Web"