If you find yourself just not as happy with your Facebook as you used to be, you’re not alone. New research from Bridge Ratings shows that Facebook users are becoming more and more dissatisfied with the service, and it might be because people are tired of being bombarded with political posts from their friends and the pages they follow.

Counting only Facebook users who have been on the social network for at least a year, people’s overall satisfaction with the service is on the decline. From 2012 to 2017, the number of people across multiple demographics who say they’re not using the Facebook platform as much as they used to has increased.

The largest decline was in the 35 to 44 year old demographic: people who were either in college or just out of college when Facebook was first introduces. In 2012, just 25% of them said they were not using Facebook as much as they used to. But that number rose to over 40% in 2017. Of course, you can attribute some of that to people this age simply being more busy with careers and kids. But the decline in use was in other age brackets too.

Facebook decline among millennials was at a much slower rate, but it was still an increase in people who use the service less. 31% of millennials in 2012 responded they use Facebook less often than before, compared to 35% who said the same thing in 2017.

While a number of factors are contributing to the “Facebook fatigue” many are feeling, one of the key reasons cited in the report is that posts on the social network are frequently taking on a “toxic tone” as friends post about the election and the current political climate.

“Prior to the 2016 U.S. election political commentary as a reason to unfriend someone, was hardly on our research radar. However, during the 2016 election season, political comments or negative postings increased and many users of the service began to feel anxious about logging on…Ant it’s not getting any better [now that the election is over]” the report states. 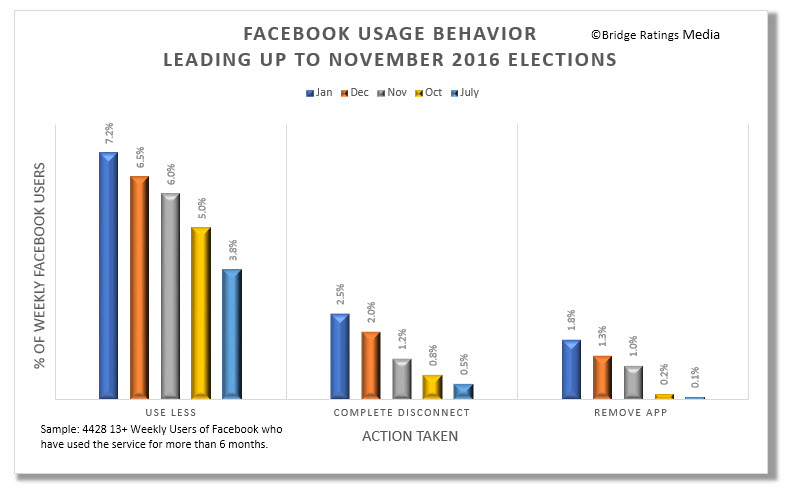 Of course, these numbers don’t mean that Facebook isn’t popular. It’s still the leading social networking service in the world by a long shot. eMarketer recently estimated that Facebook reaches 9 out of every 10 online social media users. But these numbers could be why Facebook is turning their focus so heavily to video. They’ve got to recapture people’s attention somehow.

In the next four years, Facebook estimates there will be almost 13 million new users in the US alone. Facebook Live and a renewed focus on video likely accounts for some of that, but here’s the most telling stat: almost 50% of Facebook’s new users in the next years will be age 65 and older.