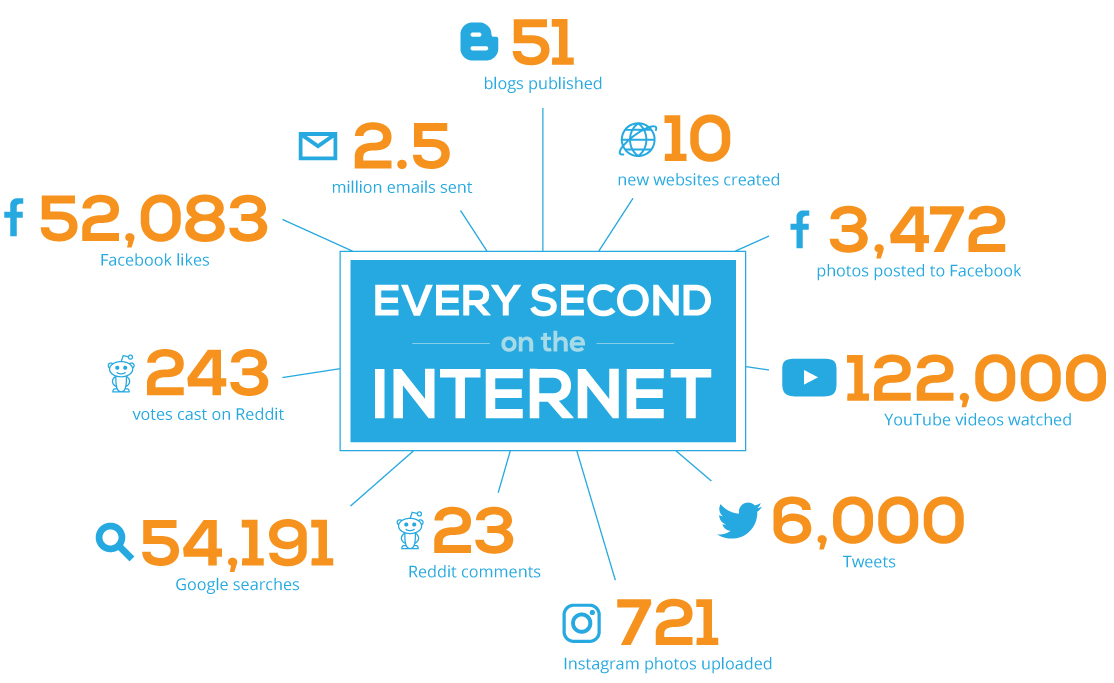 The internet is a huge place. In fact, it’s so huge that it’s impossible to visualize just how much content is out there just waiting to be read. The internet is it’s own digital universe, too vast to imagine, but insanely interesting in even the smallest dosage. The world is connected in ways that were thought impossible just 20 years ago, as the internet “big bang” just started to take place.

With each passing year we see huge growth in the total number of internet users. Today there are more than 3.3 billion users around the world, which is nearly half of the entire population of Earth. As internet connected devices become cheaper to manufacture and find their ways to rural areas and third-world nations, the number of users will inch its way closer toward connecting every single person.

Don’t believe me? Just take a look at what happens in a single second on the world wide web.

That’s right. 51 blog posts are published every second, spanning every subject that a person would realistically consider writing about. That number includes blog posts on personal and company domains, as well as platforms like WordPress and Tumblr. It’s no wonder why many that want to start blogging can feel overwhelmed or find it difficult to gain traction. How do you stand out in a sea of blog posts? By creating content that is laser-targeted for the interests of their audience.

If you thought the number of blog posts published per second was daunting, the number of emails sent every second blows it completely out of the water. With 2.5 million emails sent every second, email reigns supreme as the largest communication technology in the history of mankind. Granted, a good number of those are automated marketing messages and not a person physically sending an email. But even with that in mind, 2.5 million emails per second is still a jaw dropping number. Despite being the first large-scale internet communication method, email has aged surprisingly well. It has survived the rise of social networks and still holds its position as the go-to method for sending information for individuals and businesses and continues to grow each year.

At the heart of the mind-boggling size of the internet is Google, the closest thing that we have to an index of all content online. According to VentureBeat, in 2013 Google was searching 30 trillion web pages more than 100 billion times a month. That size of operation is required to sustain a web page index that gets as much usage as Google’s does. Every second Google processes 54,191 searches, connecting searchers with the largest database of knowledge that humans have ever possessed, although most of us are probably just searching for cat memes.

Originally founded in 2004 by Mark Zuckerberg, today Facebook pulls in nearly as many likes per second as Google does searches. Facebook is the second most visited site in the United States, second to only Google. Facebook continues to report user growth every quarter, and in the 1st quarter of 2016 the behemoth boasted a total of 1.6 billion users overall. Every second people are browsing their timelines and clicking the “Like” button 52,000 times. That means Facebook fanatics are clicking the “like” button more than 3 million times per minute, and 187 million likes per hour.

After launching in 2006, YouTube has grown exponentially every single year. Since 2013, YouTube has been the second largest search engine in the world, behind only their parent company, Google. It shouldn’t come as a huge surprise that YouTube is able to pull in tons of video views, but 122,000 per second is a staggering number. In many ways, Google’s YouTube video platform has displaced Google for a variety of searches. For instance, “how to” searches on YouTube have grown 70% year over year, as the platform lends itself really well to showing how to do certain things.

Instagram was originally launched by Kevin Systrom and Mike Kreiger in October 2010 as a free mobile app for sharing pictures. For over a year they experienced huge growth before being acquired by Facebook in April 2012 for roughly $1 Billion in cash and stock. Since that time, Facebook has managed to continue to grow the platform, enjoying 23% growth in 2013 while Facebook as a company only grew 3%. For the younger generation, Instagram has displaced Facebook for photo sharing and has become one of the largest mobile social networks.

In a single second, there are an average of 243 votes cast on Reddit, a website that has become the premiere content aggregator for all online content, dubbing itself the “front page of the internet.” Reddit’s user base mainly consists of men and women ages 18-29, with 15% of total male internet users in that age range using the platform. According to Alexa, Reddit is now the 27th largest website in the world and the 9th largest website in the United States. In addition to the 243 votes cast per second, 23 comments are left every second of the day, helping Reddit to become one of the premiere discussion platforms online. In addition to being the largest content aggregator online, Reddit is also the defacto destination for cat memes.

In the last two decades, we have seen the internet evolve into an ecosystem that drives communication and self-expression across the world. The number of actions that users take in a single second across the most popular platforms is staggering. With each mouse click, new content is generated that helps to inform the public and shape online discussion in ways that we could not have imagined just a decade or two ago.