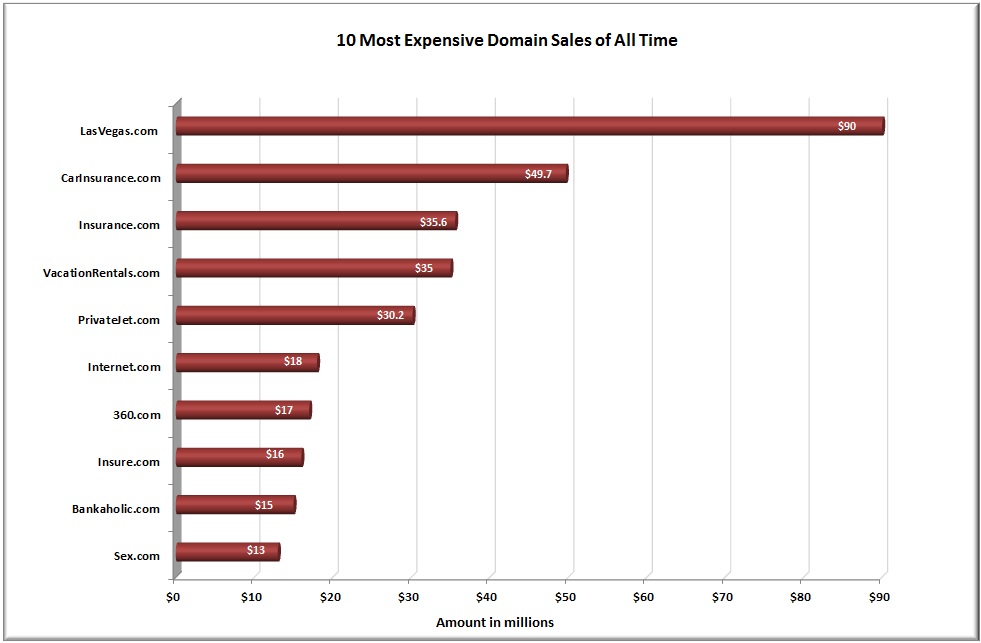 “20-years ago TODAY I saw something so big and so life changing that I just wanted to share it with the world.”

These are the words of Rick Schwartz, published on his blog in December 2015.

Schwartz, also known as the Domain King, was one of the early pioneers of the internet. He hunted down domains for sale and later traded them to buyers with deep pockets.

“Domains ARE the real estate of the future. It was true 20 years ago and it is FACT today,” Schwartz said.

In this article we examine the most expensive domain sales of all time. We also explore what can be learned from these and other domains for sale.

Appropriately, given its name, the sex.com domain name has a history of lies and scandal.

Stephen Michael Cohen, who had previously operated a membership site for swingers, had been eyeing the domain. He wasn’t going to rest until he laid his hands on it. Cohen eventually acquired the site through fraudulent means.

Kremen responded by filing a law suit against Cohen. Kremen’s lawsuit succeeded and he regained control of the domain.

Then, in 2006, Escom LLC purchased Sex.com. But Escom fell on troubling times and in 2010, the domain name was sold once again. This time it was auctioned on sedo.com.

On October 20, 2010, Clover Holdings LTD purchased sex.com for $13 million. Little is known about Clover Holdings, other than that it is an offshore holding company based in the Caribbean island of St. Vincent. In a 2011 interview with TechCrunch, the new owner of Sex.com predicted that the site would earn him “well into seven figures a year.”

Wu turned Bankaholic into a financial blog. His site quickly climbed high in the search rankings for popular financial terms. This attracted the attention of Bankrate.com, who purchased the domain for $15 million.

Bankrate.com is a public company. They own a variety of websites, including creditcard.com and caring.com. In 2015, Bankrate.com reported revenue of $371 million.

Media company, Quinstreet is not afraid to invest heavily in desirable domain names. Quinstreet is responsible for four of the most expensive domain sales in history. The first of these is Insure.com.

Quinstreet is an online performance marketing company. They generate leads in select industries then sell them to other organizations. Lead generation can be a lucrative business. In 2015, Quinstreet reported revenue of $282 million.

Vodafone sold 360.com to Qihoo for $17 million. After turning their back on the Vodafone 360 brand, Vodafone had little use for the domain.

Qihoo is an internet company in China. Their main source in revenue is online advertising. In 2014, Qihoo reported earnings of $1.4 billion. Clearly, the internet business is booming in China.

In 2012, Nations bought PrivateJet.com for $30.1 million. At the time of the purchase, Nations was looking to expand its worldwide charter, aircraft acquisition, and private jet sales business.

“PrivateJet.com is a phenomenal asset,” said Kenneth Starnes, Nations CEO. He went on to predict that “it will help us revolutionize the super luxury segment of Private Jet transportation,”

Vacation rental search site, HomeAway, purchased VacationRentals.com in 2007. The price tag was a cool $35 million. Yet most surprising of all was the admission from Brian Sharples, founder of HomeAway, that he bought the domain to prevent Expedia from getting it.

This story speaks volumes about how high a value businesses place on specific domain names. Especially those that contain a popular search term in their industry.

Insurance.com was an established website which attracted good traffic. At the time of the purchase, an analyst asked “aren’t you just buying the domain name”. Quinstreet responded, “this is not a domain name”. The company also valued the existing content and traffic. They were prepared to pay a steep price to obtain them.

CarInsurance.com was another established website that benefited from considerable organic traffic. It was the ideal fit for Quinstreet’s lead generation business.

The number one domain sale of all time is LasVegas.com.

According to an SEC filing found by domain investor George Kirikos, Vegas.com are in the process of paying $90 million for LasVegas.com. This includes a 35-year payment plan that started in 2005.

Here’s a snippet from the filing:

At the time of purchase, LasVegas.com was already an operational website. It had a global Alexa ranking of around 30,000 and was ranked number one on Google for the search term Las Vegas.

Domain Names For Sale: The Art of Valuation

As this list shows us, valuing a domain is both art and science.

There is no one formula that determines how much a domain name is worth. To the right buyer, a specific name is valued in the millions. For example, Quinstreet paid around $100 million to acquire four domains. These now contribute to a $282 million business.

Rick Schwartz, the domain king, explains his valuation process. “My basic premise that I employ is asking one simple question. How much would just one location cost in the real world. Rent, insurance the whole 9 yards. So if a small store has a $2500/month rent that is $30k a year and over 10 years is $300k plus.”

Whatever formula you use when searching domain names for sale, you need to consider other potential buyers. What is the domain name worth to them?

At first sight, you may not see much value in the name Bankaholic.com. Yet Bankrate.com was willing to pay $15 million for it, making one financial blogger an instant millionaire.