Love it or hate it, Buzzfeed is one of the biggest websites in the world. According to Alexa, Buzzfeed is the 47th most popular website in the United States and the 140th most popular site in the entire world. The site gets 7 billion views each month from more than 200 million unique visitors. And despite the company falling well short of its projected revenues in 2015, Buzzfeed is still estimated to be worth $1.5 billion.

The point? Whether you’re someone who is wondering how to start a blog or you’re a seasoned blogger, everyone can learn something from studying how Buzzfeed has built its massive digital empire.

So, just what is the secret to Buzzfeed’s success? Why is it seemingly impossible to get on Facebook, Twitter, or any other social platform without being bombarded by their content?

We decided to take a look at the most popular Buzzfeed articles to see if we could identify the magic formula they use to create viral content. Using BuzzSumo, we were able to identify the 500 most shared (based on total shares across Facebook, Twitter, and LinkedIn) Buzzfeed articles published over the last year. We then analyzed these 500 articles, focusing specifically on their readability (the grade level they were written at), headline style, and length: 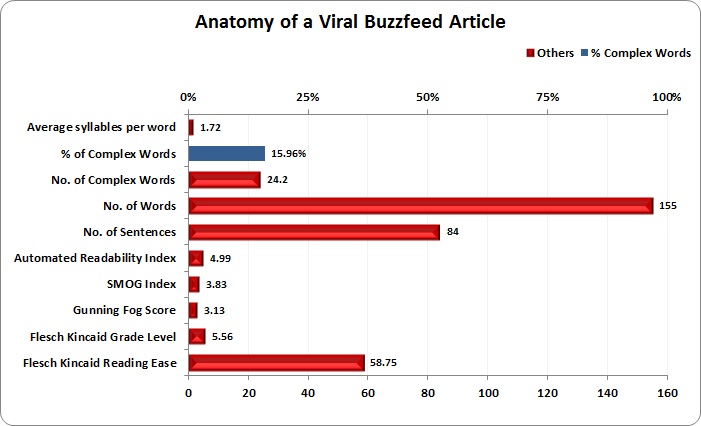 The average Buzzfeed article is written at a 4th grade reading level.

Despite its push in recent years to move beyond listicles featuring cute cat pictures and 90s nostalgia and into legitimate journalism, Buzzfeed’s most popular articles are still mostly written at a level that a 9-year-old can easily understand them. The top 500 shared articles achieved average scores of 5.56 Flesch Kincaid Grade Level, 3.13 Gunning Fog, and 3.83 SMOG Index — averaging out to a 4th grade reading level.

For comparison sake, we also ran the top 500 articles from Huffington Post and CNN through these same tests. We chose these two sites because Huffington Post does a balance of traditional journalism along with the clickbait Buzzfeed is known for, while CNN is an example of a site that focuses exclusively on “real” journalism.

Here’s how Buzzfeed stacked up against those sites: 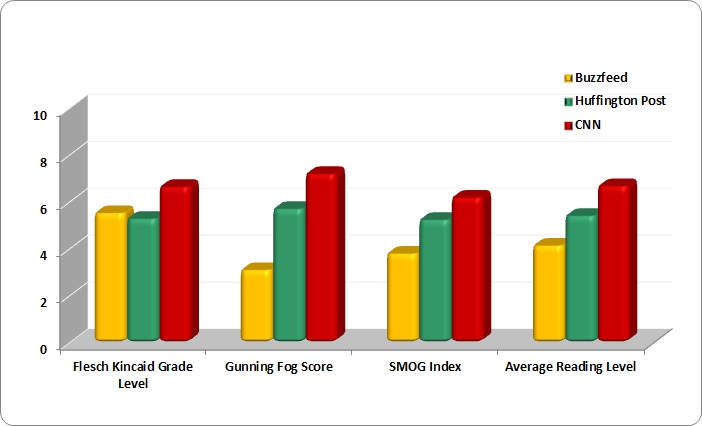 The lesson here is that you have to know who your audience is, what they’re looking for, and how to adapt your blog ideas and content to best appeal to them. Buzzfeed wants its content to be easy to read and enjoy for a diverse audience across all ages, so it makes sense to keep the language simple.

As a blogger, your job is to communicate with your target audience in a way that best resonates with them. That might mean writing at a 4th grade reading level or at a college reading level. It’s up to you to know your audience.

65% of Buzzfeed’s viral articles are listicles.

From 18 Photos That Won’t Make Sense to Sisterless Families to 34 Unforgettable Back-To-School Things All ’90s Teenage Girls Did, the listicle is still the most common type of Buzzfeed article. List posts are inherently shareable and are typically quick and easy to read or scan over. Even within Buzzfeed’s 10 most shared articles over the last year, you can see how dominant the listicle is, accounting for 6 of them. 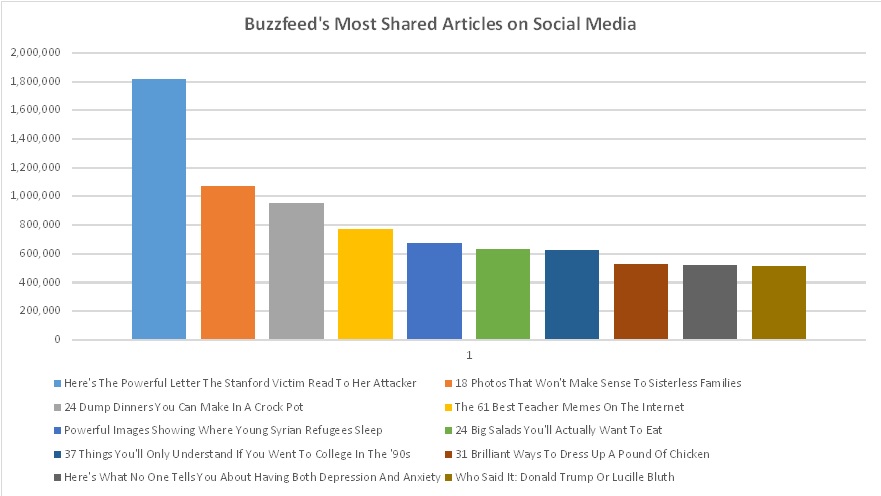 Now, does that mean that every article you write needs to be a top 10 list? Does it mean that listicles are the magic bullet for viral success? Of course not. But it does serve as a reminder that catchy headlines get clicks and easily scannable content is ideal for the web.

If you want to write better headlines to give your content the best chance of getting noticed, I highly recommend using the free Blog Post Headline Analyzer tool that CoSchedule offers. You can put your headline in the tool and it will provide instant analysis on how share-worthy and SEO-friendly it is, so you can get more clicks.

The average headline length of a Buzzfeed article is 10.47 words and 59.28 characters.

Headline length is something marketers have always debated. Is there an ideal headline length? If so, what is it?

While this Kissmetrics article states that the “perfect length for a headline” is 6 words, this Hubspot report claims the ideal headline length to be between 8-12 words and under 70 characters. The truth is nobody really knows the answer, and as with everything else, it all depends on the audience.

At Buzzfeed, the average headline of a viral post is right around 10 words and just under 60 characters.

There is some importance to those numbers. At 59 characters, the title won’t get cut off in search engine results (Google typically cuts off titles that are longer than 70 characters) and won’t exceed Twitter’s character limits when shared.

Ideally, you should be testing out different headline lengths to see what generates the most clickthroughs and shares with your particular audience.

Buzzfeed keeps its articles short and easy to read.

The average Buzzfeed article we analyzed was just 155 words long. To put that into context, the average 3rd grade student can read 150 words per minute. An 8th grade student can read 250 words per minute. In other words, Buzzfeed’s articles are designed so you can read them quickly and easily, share them, and get on with your life. They’re often heavy on the images and gifs and light on written content.

Again, this doesn’t necessarily mean that short-form content is the only way to attract an audience or score a viral hit. For the fun, humorous, light stories that Buzzfeed is most known for, short-form content makes sense. After all, a 5,000 word article that takes 20 minutes to read on the funniest times a cat was doing cat things probably wouldn’t get read by that many people (except maybe those over at /r/cats on Reddit).

But not every site is like Buzzfeed. Your blog might be focused on being a thought leader, providing data-driven articles and in-depth analysis to educate readers. In those cases, a 155 word article like Buzzfeed does wouldn’t make sense. Long-form content would likely be best for getting your message across effectively.

It’s not length alone that matters. It’s about the purpose of the content you’re creating, the value you’re delivering, and the wants of your audience.

It’s hard to argue against the success Buzzfeed has achieved. They clearly have a formula they follow that helps their articles get more social media shares, more traffic, and more buzz. Every blogger can benefit by studying what it is that Buzzfeed does so well and apply any applicable takeaways to their own work.

However, as we pointed out multiple times throughout, there isn’t a one-size-fits-all approach to creating great content that people love. It’s about truly understanding who your audience is and what they want, and delivering it to them in a truly memorable way that demands their attention.

14 Comments on "The Science Behind Buzzfeed’s Viral Articles"