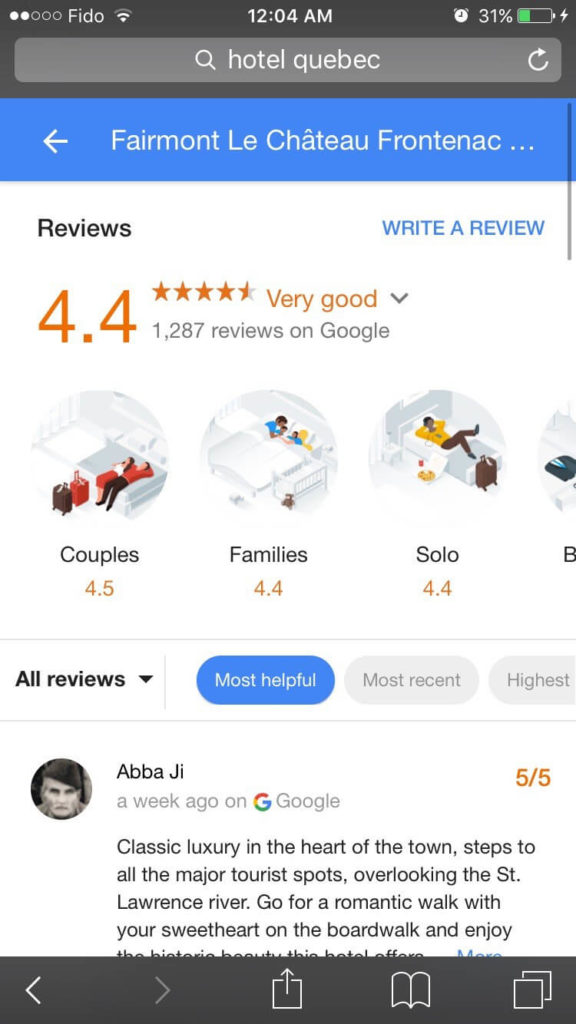 “Relevancy” is becoming the name of the game in online travel, as companies are starting to realize that what’s a great fit for one person might not be for someone else. That’s why Google is now testing a new feature that groups their hotel reviews by traveler type and service category.

How the feature works, according to people that have seen the early testing, is that a user can break down hotel reviews by traveler type, like families, solo, business, or romantic. Clicking on a type will then show a breakdown of how that style of traveler rated different categories, including rooms, location, and service.

A hotel located in the middle of a shopping center might receive great reviews from families or business travelers, for example, but not score so high for people looking for a romantic getaway.

This would be a fairly big change for Google should it make it into the final development stage, but it does show that personalized results are more important now than they ever have been before. And in an online landscape where there are dozens of websites to get hotel reviews, something to get a step up on the competition is certainly a welcome addition.

For Google, the travel side of things probably sees more testing than any other area. That’s likely because Google has discovered how to monetize those searches well, and because Google is the first place most people turn for travel help these days.

From the looks of things, people will be able to plan their entire hotel search using this tool, instead of using several different sites. And of course, any time Google can keep a user actually inside the Google interface instead of simply using it to get to another site, it’s a solid win for the company.