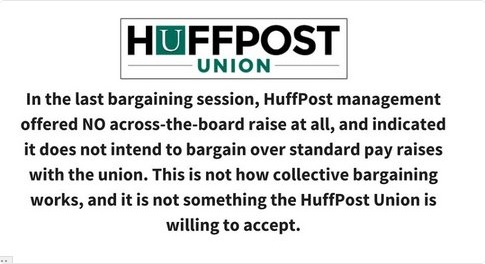 It may be an old cliche, but it’s true: nobody gets in to journalism for the pay. It’s certainly not a glamorous gig, the hours can vary wildly, and the pay is generally average. In fact, taking in job security, pay, and several other factors, a recent study by CareerCast ranked newspaper reporter as the worst in America (maybe that’s why so many people want to start their own blog).

While they can’t expect to get rich, a journalist can at least expect to get paid fairly, right? Not if you ask employees of one of the biggest online news sites today.

You may have noticed the hashtag #Huffpostunion trending on Twitter recently. That’s because the newsroom staff of the Huffington Post butted heads with management over new contract talks. The 250-person staff (this doesn’t include the roughly 100,000 unpaid bloggers the site uses as well) has been in negotiations with site leaders over issues like editorial independence, integrity when it comes to sponsored content with partners like Uber, and lastly, pay for their work.

In the latest contract talks though, HuffPo leaders wouldn’t even come to the table. The newsroom union submitted a proposal of staggered pay increases over a three-year contract period. Management came back though, with an answer that shocked staff. Not only was the proposed pay increase rejected, there would be zero pay raises. Period. And they didn’t plan on negotiating.

Lowell Peterson, the executive director of the Writers Guild of America East said that was a move he’d only seen from companies declaring bankruptcy. Never once during negotiations has the Post claimed they can’t pay their workers more because of financial limitations. They just don’t want to.

Simply undervaluing content would be enough to raise eyebrows, but it’s even more stunning given Huffington Post’s current situation. It’s a Pulitzer Prize winning media outlet with a reach of millions and one of the top 50 sites in the United States. And when it was sold in 2011, AOL snapped it up for more than $300 million. Worth noting – AOL dished out a $59 million bonus to CEO Tim Armstrong last year.

And on top of all this, they don’t even pay the vast majority of their content producers a single cent. The site is famous for paying their freelance writers in exposure only, with the belief that just being a Huffington Post writer should be payment enough.

In a recent interview with Radio 4, Huffington Post’s editor in chief for the UK not only admitted that the site doesn’t pay their writers, but actually said it was something to be proud of, noting “When somebody writes something for us, we know it’s real, we know they want to write it. It’s not been forced or paid for.”

Wil Wheaton famously tangled with the Huffington Post last year over blogger pay when they asked him for permission to reprint an article he wrote. When Wheaton asked what the pay was and received an answer of “exposure,” (something he hardly needs), he flatly said no and blasted the company on Twitter.

Wheaton Tweeted how many freelancers feel on this topic: “Writers and bloggers: if you write something that an editor thinks is worth being published, you are worth being paid for it.”

Writers and bloggers: if you write something that an editor thinks is worth being published, you are worth being paid for it. Period.

Some of HuffPo’s bloggers also took to Twitter to voice their anger over the issue, pointing out that for such a “progressive” media company, it was appalling that management wouldn’t even begin to bargain.

Management at the progressive Huffington Post is trying to bust #HuffPostUnion by refusing to bargain on pay. pic.twitter.com/X7QKHoV4RN

The @HuffingtonPost is super progressive and liberal… about everything except our salaries. Unacceptable #HuffPostUnion pic.twitter.com/YDe0WDTGty

For their part, Huffington Post has issued a statement saying that they are “deeply committed to [their] employees and to reaching a deal with the union,” and that they would continue to “negotiate in good faith with them.” When they’re absolutely refusing to pay what seems to be a fair price for their content though, it’s tough to see how that will happen.

The site has an estimated 100,000 bloggers that pull in around 86 million page views every single month, making Huffington Post one of the busiest news sites on the web. There’s certainly a lot of revenue being made by someone here, and it’s not the people doing the work.

The question is, at what point does “working for exposure” turn in to a company outright taking advantage of its workers? And at what point will bloggers decide to leave HuffPo, start their own site, and start to make money blogging that way.