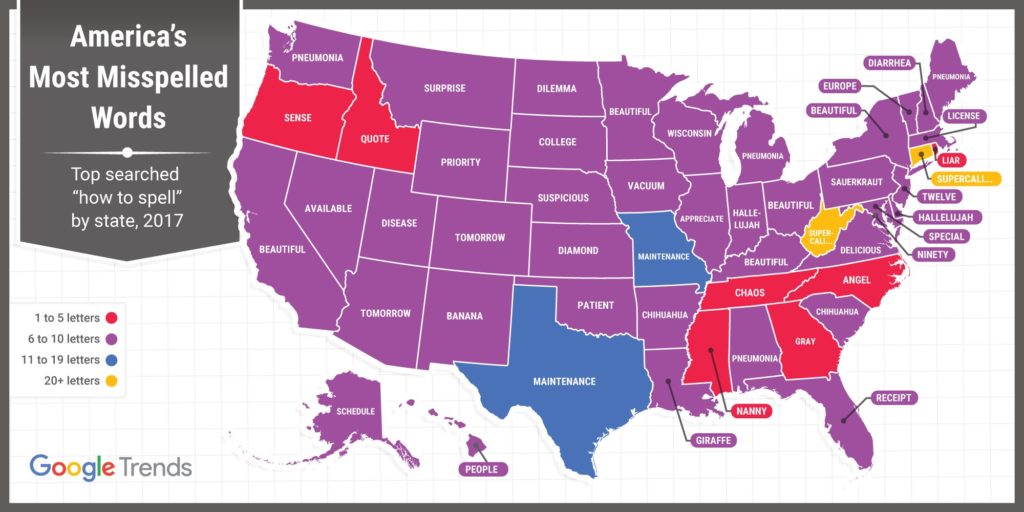 Despite the prevalence of auto correct software in virtually everything we use today, plenty of people still turn to Google for help spelling words. In honor of the 90th edition of the Scripps National Spelling Bee this week, Google Trends analyzed data from spelling searches nationwide earlier this year to see what one word each state had the most trouble spelling. For the most part, the words makes sense. But there are certainly a few surprises.

Google compiled searches that started with “how to spell” to find each state’s most common missed word. Most states had trouble with notoriously tricky words, like “pneumonia” in Washington and New York, “chihuahua” in South Carolina and Arkansas, and “diarrhea” in New Hampshire. But Oregon struggles with a fairly basic word in “sense,” Washington, DC can’t spell “ninety” and Idaho can’t seem to spell “quote.”

“Gray” and “liar” were the two of the shortest words on the list (Georgia and Rhode Island respectively), while the word “beautiful” appeared most often, coming in tops in five states. If there’s one shortcoming that makes sense though, it’s the word that West Virginia and Connecticut searched for most often: Disney’s fictional “supercalifragilisticexpialidocious.”

Texas and Missouri has the longest entry on the list otherwise, both missing “maintenance.” Pennsylvania struggles with sauerkraut, which makes sense given that region’s demographic.

Perhaps most troubling though, was the state of Wisconsin. Their most misspelled word? “Wisconsin.” It does make sense they would be spelling that word more often that others, which maybe explains the increased searches. But you’d think they’d know how to spell their own state name. Many of these words do actually appear on the list of the 50 most commonly misused words, so the people searching for the right spelling aren’t alone.

Naturally, Google’s original map included a misspelled word of its own as D.C.’s entry was listed as “nintey.” A correction was issued several hours later.
SHARE
TWEET
PIN
SHARE