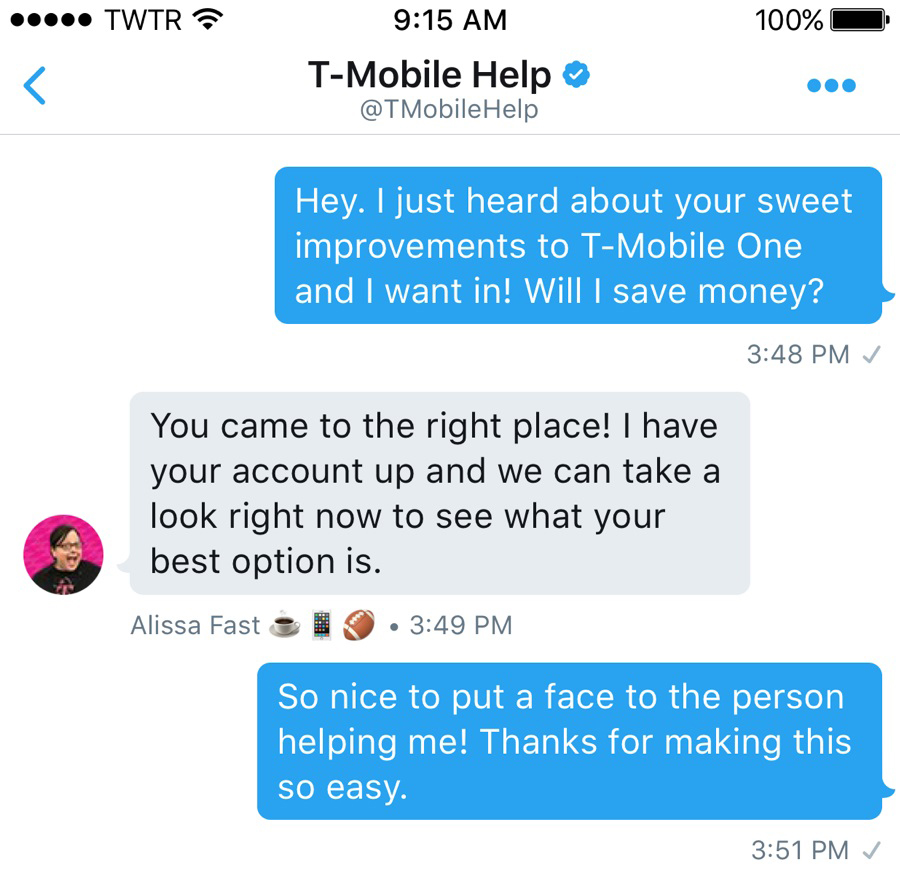 Just about every major company uses Twitter for customer service these days, and it really is a great way to quickly resolve customer issues. It’s always felt a little “impersonal” though, sending messaged back and forth with say, “Delta.” There’s just something cold and impersonal about having a conversation with a company logo.

That’s about to change though, because Twitter is rolling out custom profiles that let users see the name and person of the representative they’re actually dealing with. For now, Twitter is testing the feature with T-Mobile. Send the cell company a direct message on Twitter, and you’re likely to get a reply from the smiling face of “Alissa” instead of just the brand name and logo.

It’s certainly not groundbreaking territory for Twitter. After all, people just want their issues taken care of. Does it matter if they know the name of the person who helped them? It turns out that it actually might.

Twitter released research back in 2015 that showed two important things: more then 75% of people are more likely to recommend a specific brand after they’ve had a personalized customer service interaction, and people are almost 20% more likely to feel like an issue has been resolved and over 20% more likely to express satisfaction with a brand after they’ve had a personalized interaction. In short, it really does leave a better impression with customers if they can put a name and a face behind the person that’s helping them.

For now, companies can apply to take part in Twitter’s beta test of this feature. Companies will have the choice of whether they want “human” names, “bot” names, or a mixture of both. Given that this test is coming with a fairly high profile brand, it’s likely this feature is going to roll out to everyone soon.